There's Nothing Wrong with Silver!

Alright, that might have been a slight exaggeration. We don't really operate outside of the states. In all seriousness, the Speedi-BILT is a powerful shelving unit made popular by its simplicity. The only required components? Beams and posts. Even better, the Speedi-BILT offers a tremendous amount of uninterrupted storage volume. This makes it a favorite of those who need space to effectively organize bulky items, but seek to avoid the hassle of more intricate units. 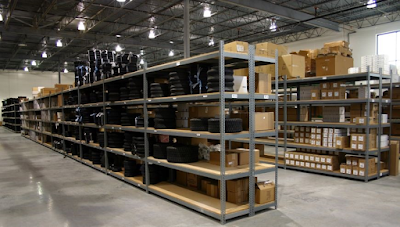 There's no need for premium hardware like compression clips or special tools when it comes to assembling this multipurpose unit. Because the beams' rivets snap neatly into place on the slotted angle posts, you can expect to use nothing more than a mallet and screwdriver to erect the Speedi-BILT. Larger units are exclusively constructed using double-rivet beams and channels for added load-bearing strength. When necessary, support ties are added to complete the base structure. Shelves composed of particle board or similar materials are then installed to finish the assembly.

Depending on a number of factors, namely whether you've elected to use single or double rivet beams, the Speedi-BILT can handle capacities ranging from 200 to 1,000 pounds. The sheer versatility of this unit all but guarantees that we're continuously learning about new applications for it. While additional storage and reorganization are obviously the most common, our customers have also employed the Speedi-BILT to solve issues related to rotating inventories and storage flow. If you've been searching for space-saving, economical storage, you can breathe easy. You've found the Speedi-BILT.

Bilt Industries Inc
Belton, Missouri, United States
Bilt Industries, Inc. purchased the Klip-Bilt II and Quick-Bilt shelving lines from the Frick-Gallagher Manufacturing Company in 2004. Designed at its inception to be the leanest viable business in the industry, Bilt was structured to rapidly adjust to market forces so as to insulate its customers. We've been skillfully succeeding ever since. Spend some time getting to know us!